“Evan likes the simpler stuff. Cheese is cheddar and coffee is coffee…none of that frothy crap they serve up these days. His idea of continental cuisine is cruising the drive-through in a Lincoln. He has no airs about him whatsoever when he’s on his own time.”

Okay so maybe I’m a bit more like Evan than I care to admit.

The idea for this blog came to me while I was cleaning a couple of my old smoking pipes from the Sixties. A pipe and a beaten pouch of tobacco was standard equipment for my group back then, the significance of which I’m just beginning to realize. There are a lot of memories surrounding those chunks of briar and just holding them brought back some simpler times.

The guys in my group used to have ‘boy time’ where we’d sit on a creaky derelict porch or rickety old steps with some wine or beer and a pipe-full (mostly legal puffinstuff I assure you Arlo). We’d talk about everything and nothing…and we’d laugh a lot. There was no problem that couldn’t be solved if we took the time to talk it through. Things seemed so much more innocent and easy back then but maybe it was just because we didn’t know any better. We respected each other’s opinion and respected each other. Our boy times were often short-lived as the girls in the group would usually crash our little party but it didn’t matter. They were each just one of the guys anyway…except they smelled better.

My grandson just completed a game on his new Playstation4…to the end…finished it! It took him less than a week. I watched some of his play and I couldn’t get by the graphics. It was like watching a video for crying out loud. I had to use the controller to sign him on and I was completely befuddled with all the buttons and toggles and…well you know where I’m going with this. He’s sixty years younger than me and can easily glide through various screens pressing three or four buttons at a time while providing a boisterous running commentary of “What the…” and “Take that sucker”.

Me? I still love my Atari 2600. Okay the graphics leave a lot to be desired but it’s a joystick and one button. There’s an alien space ship coming at me? I line up my cannon and press the red button then watch it explode into a multitude of square pixels and disappear off the edge of the screen. It’s my speed doncha know?

What has this to do with writing?

In the middle of editing some work last night my computer froze then shut down. It saved most of what I’d done to a backup file but not all of it. It’s not that big a deal really but it does remind me of why I still prefer hard copy and pencil. My pencil has never frozen on me…not once. It doesn’t require updates and the only virus it contracts is from an unexpected errant sneeze.

I’m also reminded of how NASA spent millions of dollars to create a pen that would function in zero-gravity while the Russians solved the problem by using, yup, a pencil. 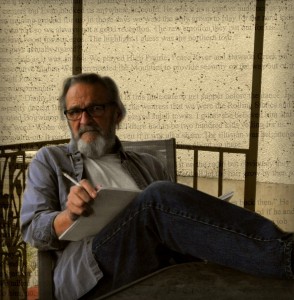 This past summer I spent a lot of time on my newly-built deck writing or editing and most of that time was spent clutching a little white golf club pencil. I don’t play golf and I’ve never heard of this golf club but somehow I ended up with their pencil. I suppose I could complicate my life and try to figure out how I obtained this little instrument but really…does it matter?

Life today isn’t simple. In my humble opinion all the stuff we’ve invented over the last few decades to make our daily lives less-complicated has done exactly the opposite. I believe it would serve us all well to occasionally peace out on a back porch with a little baccy and a glass of wine and watch the sunset. To simply appreciate the moment.

You might call that a pipe dream…and you’d be right.

Basically it means you must say the right things to the right people at the right time in the right place…the theory being that four rights can’t possibly make a wrong. Personally I’d rather be forthright than first wrong so I tend to not say anything to anybody at any time in any place. Needless to say I lead a pretty quiet existence.

It seems the only way one can be assured of not offending anyone at a gathering is to never discuss race, religion, politics, sexual preferences, sports involving animals, unions, management, alcoholic beverages and tobacco, endangered species, foreign policy, equal rights, environmental issues, salmon, interest rates, atomic generators and submarines, strip mining, pet shops, red meat, 50 Shades of Grey, cosmetic surgery, art, education, m’ladys dainties or the detergent in which they are washed. That leaves oatmeal…unless we’re mad at Scotland for some bizarre reason.

I suppose it is testimony to our times that we are even concerned about this type of correctness. I remember anything going as long as it didn’t hurt another person. Do Unto Others and the like…but the times they have a’changed.

I have a couple of characters in White Wolf Moon that try to maintain a certain level of PC (sometimes without success) but they are also from an era when the word “respect” had a certain meaning. These guys may not agree with your arguments or beliefs but they will allow you the floor asking only for equal time in return.

What started this post was a clip on the news this morning.

Remember “the stump of a pipe he held tight in his teeth and the smoke it encircled his head like a wreath.”? A British Columbia author has updated the classic bed-time Christmas Eve poem to exclude any mention of Santa’s bad habit. Really people? After careening around the world in one short night behind eight tiny reindeer the old boy deserves at least a puff or two don’t you think? (We won’t even mention that Santa wears (gasp) fur!!!)

Maybe I’m being silly but why didn’t the author go that one step further and eliminate the word “Christmas” from the title?  School concerts have dropped it because, well, some folks don’t celebrate it the same way that I do, if at all…and that’s fine. That’s their choice or their faith and far be it from me to censure those beliefs…all I ask is that they offer me the same courtesy.

We are not all alike. That’s one of the beautiful things about the human race but we have to respect what each of us brings to this planet. We can learn from each other’s beliefs and cultures but we must, as was the standing order in Star Trek, observe and not interfere.

Yes we will always have ideological differences. However, as Evan Morris states in White Wolf Moon, “…the realization of differences can create barriers but accepting those differences can just as easily tear them down.”

Merry Christmas to all….