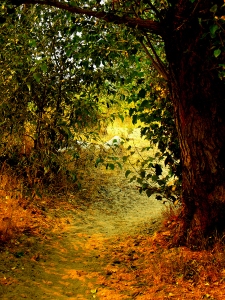 Paths that lead to Evermore

Paths that twist and turn

Then not so surprisingly

Twist and turn some more.

The above photograph was taken in 2010 along the North Thompson River in Kamloops. This part of British Columbia was engulfed in forest fire smoke. The thick acrid blanket lay heavy everywhere but the light of the filtered morning sun created quite an ethereal scene. I didn’t think the little camera I take on my walks would be able to accurately capture the mood of the moment but it came pretty close. The air was warm and still, there was little noise, and the world was orange…it was like walking through an old master’s painting.