Finally the proofing print-outs for “Barking at Yesterday’s Moon” are done. After nearly two weeks of re-formatting, rewriting, and tweaking it’s ready for that annoying hard-copy proofing that always seems to uncover a multitude of little things that for whatever reason don’t show up on the computer screen! 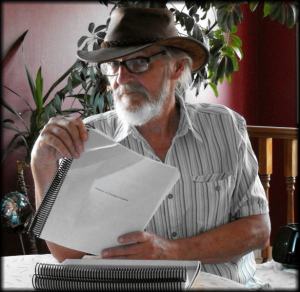 It has taken far longer to get to this stage than I anticipated. It seems that every week I tell everybody that I’ve got it together and then I run into more setbacks and more delays. Originally I hadn’t planned on writing a sequel to “White Wolf Moon” but, according to readers, I left many answered questions. They wanted to know more about wolf-dogs or the relationships between some of the characters. ‘Okay’, I thought, this should be easy. I had a lot of material left over from the first book…I’ll just put it into a second. I didn’t realize how little I’d held back. There wasn’t really enough for a short story let alone a follow-up novel. It ended up being more of the same and actually a little boring as far as I was concerned. I wanted to add a little excitement so I introduced some new characters that ended up creating a little mild gunplay, fisticuffs and…I’ve already revealed too much. I’ve opened up the characters, showing different sides of the human and non-human inhabitants of my little world. I’ve explored and hopefully answered all the questions of those people who enjoyed “White Wolf Moon” and done it while maintaining the original light-hearted style.

I was happy with what I had done all those months ago. Then I read it from the beginning to…about page twelve. If I had not read or been familiar with the first book I would have no idea what was going on. I hadn’t really introduced the characters and I had referenced many things that happened in the original story that simply wouldn’t make sense to someone reading “Barking at Yesterday’s Moon” as a stand-alone. That is why it has taken so long. It seems every time I read it I find something else that should be clarified or even deleted. I have restarted this long journey countless times and I’m still not sure it’s over. I’ve realized that writing a sequel is tougher than starting anew with different characters and a fresh story-line. This is opposite to what I had originally thought.

One more thing that I’ve noticed. This sequel is now finished and, with no intention of making this a trilogy, I find my world seems a little empty now. I sense withdrawal anxiety after only three days of not having Evan, Danny, Marie or Ginn gracing my laptop. I am going to miss them.

“Barking at Yesterday’s Moon” is now in new hands and will be read by a different set of eyes. I can’t help but be a little nervous about this stage but it’s also exciting. What will come of this critique…I don’t know. Perhaps all will be well…perhaps there will be additional tweaking. Either way it is a step forward.

The next step is the process of learning how to become an independent author.

I suspect that’s where the real work will begin.